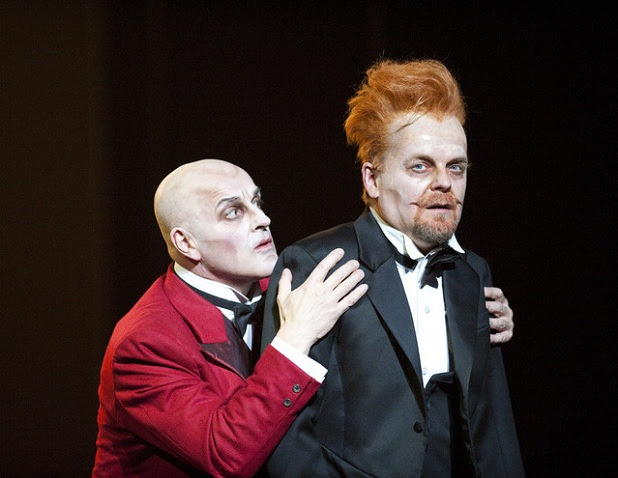 I had a lot of trepidation about the ENO production of Berlioz's The Damnation of Faust; not because Gilliam hadn't done opera before, which seemed to put some people off—after all what better to do with an over-sized imagination than put it to use in the heightened spectacle of opera?—but because of the trailer and the thought, "Oh, not Nazis again." The ultimate banality of evil is that it can be used without controversy or effect. Apart from bizarre extremists of various stripes, most people are are board with the whole Nazis=bad, so I imagined some ham-handed club about to be wielded over the audience.

But yeah, I got my ticket anyway. It was bound to be spectacle, right?

Gilliam did not disappoint. The production literally starts with a bang that clearly startled many in the audience. Enter Christopher Purves as Mephistopheles with a few of his lost souls, announcing himself as our infernal compere for the evening. His hellfires seem to always be ready to lick at the feet of the players, ever present. As our shock-headed Faust, Peter Hoare enters the pastoral opening his work literally on his back as he ignores the courting couples in the forest in search of solitude to return to his calculations and contemplation, but the spirit of the spring invades, including a Krampus and Holda as if it were almost a mythic spring. How can he resist?

Mephistopheles persuades Faust out of his cell at last; the cell looks not like a monkish scholar's room, but a holding cell in an asylum. Coupled with Faust's later appearance in a straight-jacket, it may be a way to cast doubt on the veracity of all that occurs, but it's not really important.

I have to admit, the Nazi motif worked perfectly; after all, Berlioz's opera unfolds against a backdrop of war. The slight relocation in time suits. We see the rise of the fascist movement gradually as Faust's own story unspools. In the tavern scene a few brown shirts stand out, but as the scene unfolds we see them gradually muscle through the crowd and gradually more chorus members remove their jackets to reveal brown shirts and uniforms underneath, until the majority of the tavern crowd has joined up. It works.

It works too that Marguerite is a Jew that Faust first sees singing the role of Brunhilde in the Ring wearing a blonde wig. Mephistopheles' careful maneuvering of Faust into her room occurs on a setting that I knew at once would turn into Kristallnacht, but Gilliam kept the audience waiting for it then in the midst of the scene, rolls back time restoring all the broken windows and returning people to their homes to replay the scenes slightly differently with more direct interference from the demon. You begin to suspect that all the mayhem in the land has been his doing.

I find Berlioz's opera a lugubrious affair and I much prefer Marlowe's Faust to Goethe's sappy romantic, but Gilliam had the story cracking along with the most amazing visuals that combined good old fashioned stage craft, projections, puppetry and a good bit of flash and explosion. The mad race to "save" Marguerite was a fantastic hell journey, the final damnation an incredible glorious release of the hellfire, and so many moments were simply cleverly apt and nimble. It was a great way to employ Gilliam's tendency to excess without the impression that anything was superfluous.

Of course the cast was superb: Purves' Mephisto had the right combination of oiliness and menacing bombast. Hoare's Faust managed to convey the emotional wrenching of his character without ever tipping over into bathos. Christine Rice's Marguerite offered up a silky heroine with a voice anyone might fall for. The role is so small yet so important; Marguerite really has to knock your socks off in her opening song and then break your heart soon after. Rice was amazing; when Marguerite sang her breaking heart on the way to the gas chambers, there were a lot of wet cheeks in the audience. The whole orchestra and chorus were superb of course; the practically filled the stage at the curtain.

The good news is that there was a crew from the BBC (and a huge group of folk attending as well) so perhaps there will be the opportunity to see some of this even if you couldn't be there for the final performance. Gilliam looked giddy as he joined the cast on stage for the final bows. And why not? Well done, indeed.
Posted by C. Margery Kempe at 06:50

Gilliam's work is uneven, but he's always pushing the envelope. I'll watch anything he does.

Great review! I seriously wish I could have seen this.

I'm with you, George. And it was really worth it, Jennifer!