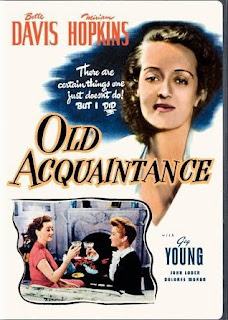 Why do I like pseudonyms? I don't know. I'm sure it means something. For the first novel I wrote back in high school, Ace Spies Incorporated (my friend Carla claims to have the only existing copy as blackmail material), I gave myself a nom de plume. Weird, eh? So my taking up the moniker Kit Marlowe continues an existing habit.

The original Kit Marlowe was of course the playwright who would have outshone Shakespeare had he lived (being far more daring and audacious). Less well known is Bette Davis' character from the movie Old Acquaintance, a big favorite of mine, based on the play by John Van Druten (he's worked on the script, too), who also wrote Bell, Book and Candle (love that movie, too). Bette Davis stars as Kit Marlowe and Miriam Hopkins as her best pal who envies her success and then emulates it. Of course, Kit Marlowe is the "arty" writer while Miriam Hopkins' Millie Drake is the popular romance writer. Why didn't I choose hers as my rom nom de plume? What can I say? I'm perverse that way.

One of the gratifying things is that the friendship between Kit and Millie outlasts both their rivalry and the man they both love. In fact, you can easily read the film as a coded lesbian narrative, with a lot of elements coming across as far campier to a modern audience than they would have done to most contemporary viewers, I suspect. Just look at the masculine way they dress Davis at the start in contrast to Hopkins' flounces and frills. Davis actually has a tie. She's very guy-ish and at their reunion at the train station gets swept away by a giggling gaggle of co-eds -- her fan club -- leaving the jilted Millie fuming and spilling milk (literally!). Hopkins' character embodies the ideal of the flibbertigibbet, but she's spurred on by a very strong sense of competition with her best friend, yet can never quite settling for winning. She alienates her husband and then her daughter, both of whom turn to the more gentle Kit for comfort. Kit continually forgives Millie's excesses despite the latter's lack of emotional generosity, until one day her patience finally runs out -- and provides one of the most satisfying cinematic moments ever:


The film was remade as Rich and Famous in 1981. It was George Cukor's last film and starred Jacqueline Bisset and Candice Bergen. I also have a fondness for that film, though it's not as good as the earlier one. I do love the way Bergen, upon having her work called "trash" by her increasingly estranged husband, snarls to correct him that it's "successful trash!" Here's to success, however trashy.

See the full list of TOFs over at Todd's blog.
Posted by C. Margery Kempe at 09:05

I don't know it bu I love Bell ,Book and Candle. Good call.

Thanks, Paul. It's got the same clever and snappy-but-natural dialogue, too. Breezy fun.

Well...Marijane Meaker, whose relation with Patricia Highsmith echoes some of this film's dynamic, put a pseud on her first pro sale (a short story in a slick women's magazine), as well as using pseuds for most of her work since. Some folks just gotta be Protean, even in nomenclature...

You should have added a link to your write up of Highsmith and Meaker's books. Yeah, I think looking at the fact that my first novel was not only a spy novel and pseudonymous seems indicative of how boring I thought myself to be. I did a 'zine in junior high called Celebrity Gossip (Carla claims to have some of those, too) and I seem to recall using lots of fake names in that as I wrote *everything* in it. The QoE and I are working on a funny book that will come out with pseuds on the cover at least.

I like Bette's films from the 30s. This one sounds good too.

It is very fun -- I think writers especially get a kick out of it.

I remember and liked both too. Good one, Kate.

and no mention of t h e Kit Marlowe?....Kim Novak's character on Falcon Crest!!! i believe Kit Marlowe was the stage name Kim Novak was originally going to take...so she finally got to use it.
b-

and not to forget...Matt Lattanzi (he could use a plug...or a toupee)

Thank you, Bertie, for the reminder, but then I was never the Falcon Crest fan that you were (are?).

Matt Lattanzi -- he always seemed like the one thing that did not belong in that film, but maybe it's because I never found him attractive.

Patti -- glad you like them, too. It's a film that I'd almost want to see a remake of because I think it could be better, but perhaps not on the current climate of Hollywood since they're so hostile to intellect.

Great blog! I truly love how it’s easy on my eyes and the details are well written. I am wondering how I could be notified whenever a new post has been made. I have subscribed to your rss feed which ought to do the trick! Have a nice day!