Falling for The Fall

Over at The Spectator, I get my geek on about The Fall: 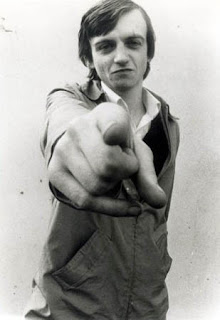 With the release of Your Future, Our Clutter, The Fall marks 33 years of recording with another stellar disc. The music has evolved over that time, from proto-punk to a more poppy tunefulness to electronica and new noise – and the line up has changed time and again.

But at the centre of the group always lies mastermind Mark E. Smith. He has famously declared, ‘If it’s me and your granny on bongos, it’s still The Fall.’ Some 40 or more folks have cycled in and out of the band over the years, as Dave Simpson has chronicled. But Smith is right: it always sounds like The Fall.

There’s an absolute certainty in his vision that can put some people off. Smith has at times been notoriously difficult with interviewers and journalists, and at times cheekily proud of the fact. ‘The Observer magazine just about sums him up, e.g. self-satisfied, smug,’ he sings in ‘How I Wrote Elastic Man’, itself a song written to express his annoyance with people’s failure to read the materials, as he clearly sings ‘How I wrote Plastic Man,’ a reference to the comic book hero.

The Fall’s music has influenced bands and artists (see his Tate Modern interview) but Smith insists on maintaining the picture of himself as just another working stiff. When an academic conference on The Fall took place in 2008 at the University of Salford, Smith’s relatives buttonholed presenters at the pub, demanding to know who authorized it, and Smith later called former Fall producer Grant Showbiz in the middle of his presentation.

The Fall are one of those bands that create musical Marmite: you’ll find very few people who can take them or leave them...

Read the rest at The Spectator and hey, leave a comment! I'm knee deep in work today. Resurfacing later -- I hope.
Posted by C. Margery Kempe at 10:01

A big influence on me. I'll pop over there in a bit. Looks Good!

Thanks, Paul! I appreciate it. I just wish I'd found them sooner!

Well, as I hope with Avram Davidson, never too late!

Indeed! I was in love as soon as I read "My Boyfriend's Name is Jello" and immediately disliked Damon Knight for claiming in is intro to "The Golem" that there was nothing memorable about the story. I knew well enough to skip the introductions to the book, but somehow I read that.

Knight could be ungracious (Ed Gorman shouts "amen!" in the middle distance, but I think that "Jello" and many of his other stories should hold the place in the public imagination that "The Golem" does...as funny as the latter is. Ed Ferman, in picking poll-winning stories for the 30th annish of F&SF, overruled the respondents and plumped for "Selectra Six-Ten" rather than "The Golem," and I'm not sure he was wrong there...of course, the chosen story was all about an incident between Ferman and Davidson (and Ferman had been Davidson's assistant when Davidson edited F&SF)...

Thanks for The Fall, I really like the electronicky snippets that I sampled, any suggestions in that area? And now to bed, with Davidson's "Naples". Yes, I am going to reread one of those authors, who, like Gene Wolfe, both compel and mystify me. Moved by their stories, I can only guess at why.

Lou, I highly recommend the collection 50,000 Fall Fans Can't Be Wrong as a terrific overview of their career for several years. That said, their latest, Your Future, Our Clutter is an excellent payoff of many years' experience and MES' usual inventiveness.